Theater in the garden 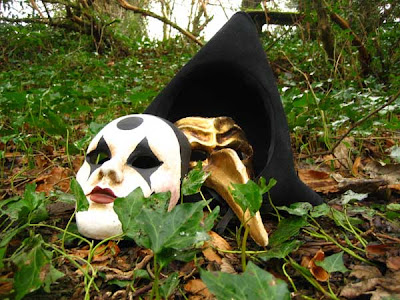 Garden Theatres
Although there are many grand Garden Theatres and huge impressive amphitheatres out there in the world, they are not something you find very often in normal residential garden design. They are however, something I like very much. So I will leave the many grand garden theatres and the huge impressive amphitheatres for another post for another day.
Today I am going to talk about the intimate and sometimes modest (but just as effective) garden theatre.

Growing up on my parents farm in West Cork, we had a garden stage, but as you can seen in the picture across, it is now quite overgrown and a little neglected (although this in itself gives it a certain charm)
The stage made up part of a bonfire garden and back in the day, there was many a party held here.
West Cork is well known for being full of fine food and culture, so back then there was no shortage of  fine musicians to prop up on the stage (these would often overflow onto the simple timber seating that surround the fire pit). To the left of the stage was a round concrete pad reserved for dancing.
At night the garden would take on a very different atmosphere, as you went from being in an open outdoor garden into what seemed like an intimate enclosed space. One got this sense of enclosure as the light from the fire illuminated the trees that surrounded and arched over the entire area, hiding all that lay beyond.
I also love this garden theatre I came across in the Everglades Gardens in Leura, set in the amazing surroundings of the Blue Mountains in Australia.
The golden pyrmont sandstone arch which forms the dramatic backdrop to the stage was originally the recessed entrance to the London Chartered Bank of Australia on Sydney’s George Street. The arch is flanked by tall hedges clipped formally to form the wings of the stage.

Another one I like for its sheer simplicity and functionality is this one by author Shawna Coronado. On her blog ‘The Casual Gardener’ she wrote about how the answer to her garden dilemma was resolved by creating this lovely little garden stage.
It is also a great example of how you can create an interesting garden feature on a small budget.
When having a rainwater collection system installed in her garden, she was left with a huge mound of soil from when they dug the hole for the tank, and of course this soil had to go somewhere! She did not want it to go to landfill so she decided to make a feature out of it. Even on a tight budget she managed to create a lovely little feature out of it. The four large tiles make up the stage, which regularly features her 10 year old daughter performing her latest stage show. It is also a spot where a musician might perform during a garden party. You can see her post about this here http://thecasualgardener.blogspot.com/2010/12/how-i-transformed-mound-of-dirt-into.html

Mainly because of my passion for stone, one of my favourites is this here, at Dick Schwab’s Celebration Barn near Solon in Iowa.
This amazing amphitheatre has an impressive dry stone arch, built with Anamosa Limestone from near Stone City, and has an impressive internal radius of 16ft (4.8m) weighing in at about 65 tons.
The celebration barn often hosts weddings, the ceremonies often held underneath the mighty arch.

The arch and amphitheatre were built by ‘Country Stone Masons’. Fellow Stone Foundation member Eric Whittlesey who works for ‘Country Stone Masons’ told me a bit about the construction process, and was nice enough to share these photos as well.
The curved seating of the ampitheatre itself is also made with Anamosa Limestone, each stone meticulously chiselled to fit tightly to its neighbour. The area can seat over 300 people.
All 68 stones that make up the arch, some weighing as much as 1.5tons, had to be painstakingly carved into the angle of the arch.
On of the most fascinating thing about stone arches is the physics behind them, and the fact that the procedure to build them has hardly changed since Roman times back in the 10th century.
The shear downward force of weight (all 65 tons of it) combined with the angles of the wedge shaped stones or ‘voussoirs’ means that the stones are almost welded together, evenly spreading the weight down both sides.
For these reasons the arch does not require any mortar to hold it together, however for peace of mind the stones were pinned together so that the masons could sleep soundly without having any nightmares about brides tragically being crushed by stones on their wedding day!
For the form that supported the arch as they built it, they used massive cotton wood timbers, which were stacked on top of each other as the build progressed. Then when the key stone was set in place, the most anticipated part of the build could be performed, this of course being the removal of the support form. I remember removing the form from the first large arch I built. As I was pulling it out, my brain kept telling me 'Of course it will stay up, there is absolutely nowhere it can go’  however its still a nerve-racking moment!
Posted by Stone Art's Blog at 3:58 PM