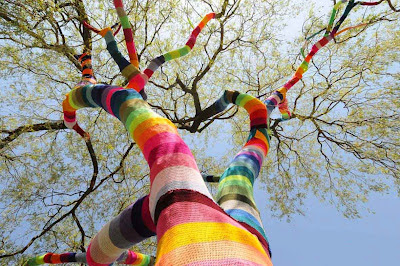 
German artist and art teacher  Ute Lennartz-Lembeck took up the hobby, also known as "yarnbombing", after seeing the work of others on a visit to Berlin.

Graffiti knitters typically install their stitched creations on signposts, statues, bicycles and any other surface that can serve as a creative display space. And just like graffiti of a more permanent kind, their work can be politically motivated, whimsical, witty or inane. Though they commonly call themselves graffiti or guerilla knitters, some of their works like the Weeping Willow tree sweater is actually crochet.

Being Ute's first project, she decided to work with a tree as it is a symbol of life, its roots, stem and crown are interdependent, one can not live and grow without the other... 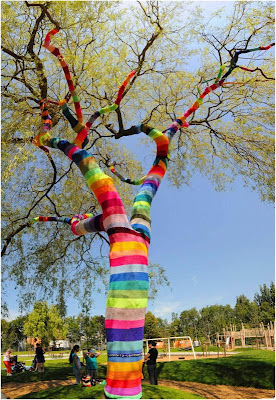 Unlike some knitting guerrillas who follow the lead of traditional graffiti artists like Banksy and keep their identities secret, Lennartz-Lembeck has taken on the role of yarnbombing ambassador, installing her creations openly and during the daytime, which often spurs conversation with curious strangers.

Ute also has a global project called B-Arbeiten or B-Work.
B-work is a worldwide network of single-word banners, attached to trees, lampposts, letterboxes, in fact anywhere that might catch the glance of passers-by in a bid to get them to reconsider their surroundings.
Ute explains that this is not the work of a single person, but of many people; friends, acquaintances and people who show interest in putting the works into their environment. Ute sends the various banners free of charge to willing accomplices all over the world. There are now over 200 attached 'values', in many places in the world. The work comes back to her in the form of a photo that she in turn, shares with the world the world on the B-Arbeiten facebook page or on her homepage.

Find out more about Ute's fantastic work on her website here.

Above photos courtesy of Ute Lennartz-Lembeck.

Another sculpture I love is this Tree Troll by artist Kim Graham.
Kim Graham began her art career as a painter in acrylics in the late 1980's but quickly moved to sculpture. She has been sculpting since then in a wide variety of media and sizes ranging from 22' wide fiberglass dragons to fired clay figuratives to architectural ceramic pieces. Kim has in recent years moved away from her special effects/fantasy based mold-making work to focus intensely on one-of-a-kind fine art sculptures. These range from beautiful Art Nouveau inspired figurative plaques to busts and portraits.
Kim's inspration for this sculpture has a lot to do with her Norwegian descent, and when the 'Lord of the Rings' movies came out, she recognized the Ents as being similar to tree trolls from Scandinavian Mythology. People identify with this image, but it has special meaning to Kim as she grew up in a small logging community in Montana, and most of her life was spent hiking and camping in the deep forests of the Northwest. The great cedar trees have always instilled a sense of awe in her, and  a surprising sense of awareness. They seemed thoughtful creatures, old, wise, and kind. Seeing the character of Treebeard in the movies inspired her to do a Northwest version.

This 12 foot tall sculpture was surprisingly made from paper mache. She chose this unconventional method for a number of reasons. Most sculptors never get the chance to work large scale. It can be really expensive. A lot the materials are toxic, require safety equipment, a lot of ventilation or at the very least an outdoor site. That is the joy of working in paper mache. This troll was built in a space barely larger than the sculpture itself. It was done indoors with no additional ventilation and with a lot of recycled paper products. Best of all, this project was intended to prove just how beautiful and sophisticated a surface can be made. 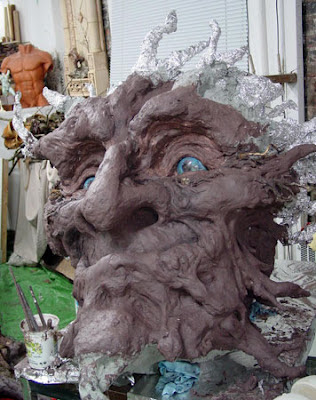 Since its creation in 2006, the tree troll has been touring many garden shows and local markets. One of the downsides to the troll being made from paper mache is that it cannot be left outdoors. This year Kim is planning a new version that will be made in concrete, which will be permanently located outdoors.
Tree troll photos courtesy of Kim Graham. Check out her website to see more of her lovely work.

Below are a few pictures of some other tree related sculptures I really like.

There are plenty of events on around the country this week for National Tree Week. To find out what is happening in your area or to advertise your own event, check out the Tree Council of Ireland website http://www.treecouncil.ie/treeweek/treeweek.html