Newgrange and the winter solstice.

As the winter solstice is coming up, I thought it would be an appropriate time to talk about one of Ireland's oldest and most impressive stone structures.
I am talking of course about Newgrange in County Meath. (County Meath  is well known as Ireland’s Heritage Capital)
According to the most reliable Carbon 14 dates available from archaeology, it is believed that Newgrange (or Sí an Bhrú as it is know in Irish) was constructed over 5,000 years ago, around 3200BC. This makes it more than 600 years older than the Giza Pyramids in Egypt, and 1,000 years more ancient than Stonehenge in the UK. It was built during the Neolithic or New Stone Age by a farming community that prospered on the rich lands of the Boyne Valley. Knowth and Dowth are similar mounds nearby that together with Newgrange have been designated a World Heritage Site by UNESCO. 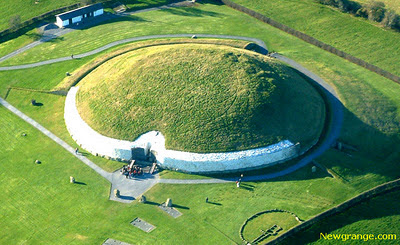 Archaeologists classified Newgrange as a passage tomb, however it is now recognised to be much more than a passage tomb. Ancient Temple is a more fitting classification, a place of astrological, spiritual, religious and ceremonial importance, much as present day cathedrals are places of prestige and worship where dignitaries may be laid to rest. The Mound or Cairn at Newgrange is about 300 feet in diameter covering an area of over one acre, and has 97 Kerbstones at the base of the cairn, some of which are richly decorated with megalithic art. The 19 metre long inner passage leads to a cruciform chamber with a corbelled roof. The amount of time and labour invested in construction of Newgrange suggests a well-organised society with specialised groups responsible for different aspects of construction.


Newgrange is an incredibly popular tourist attraction, and is a particularly popular place to visit at this time of the year because of its alignment with the winter solstice.

Immediately above the entrance to the passage is a small opening known as a roof-box, which is in alignment with the Sun at the winter solstice and allows the Suns rays to penetrate the tomb and light up the central chamber during this period (December 19th to 23rd).
Short National Geographic Video about Newgrange

Above is a 3D animation of the passage way in Newgrange. See more cool 3D models of Newgrange on this site here

As a stonemason what I find most fascinating about Newgrange is its construction.
Many of these stone slabs, 550 in number, were collected from where they had been lying in the landscape. Because many of the stones were found to be weathered, it is believed they were not quarried, so there would have been a huge logistical task in finding suitable boulders dotted throughout the landscape.
﻿
Great effort and time was needed for the planning, gathering of materials and construction of these monuments. This is clearly evident from the vast distances the builders travelled to acquire the particular stone types. The majority of structural stones in the Boyne Valley tombs are greywacke. This stone type was quarried in the Clogherhead area, north of Drogheda, and shipped along sea and river, then finally log-rolled from a docking point on the Boyne up to the construction area at Newgrange.
The facade at Newgrange consists of white quartz, which has its origins in the Wicklow Mountains to the South of the site.
The interspersed granite boulders were collected from the North shore of Dundalk Bay. The long distances involved suggest a similar sea-faring route may have been a more practical choice than travelling across land. The majority of the cairn consists of a river rolled stone acquired from the banks and terraces of the river Boyne around 1km below the monument. It is estimated that some 200,000 tonnes of material are present in the cairn. It is not known for certain the exact building practices used by this Neolithic Culture. Archaeologists have suggested various theories. It is most likely that log-rolling, the erection of wooden scaffolding and earthen ramps were employed to shift the large boulders.
Michael J. O'Kelly, who excavated Newgrange, felt that the workforce involved in building Newgrange would have been divided up into about six gangs or teams, each with its own set of tasks and area of expertise.

There is no doubt that the people in charge of Newgrange's construction, from the master builder and architect down to the team foremen, were "intelligent and experienced", according to O'Kelly.
The passage and chamber orthostats (large stones set upright) would have been put in place before construction of the cairn itself actually began, and it is probable the kerb would have been marked out at this stage too. The addition of grooves onto the top surface of the passage roof stones shows that the builders were aware of the need to redirect water seepage from the cairn, and therefore keep the passage water-proofed.
The corbelled vault of the chamber is one of the finest of its kind in Western Europe today, standing intact without conservation or repair of any kind exactly as it did when first erected 5000 years ago. All of the orthostats (standing stones) in the chamber are used to support the corbelled roof. Some have leaned inwards over time due to the weight of the cairn material pressing down on the chamber. The tomb builders filled the gaps between the roof stones in the passage with sea sand and burned soil to keep the passage dry. The corbelled roof was constructed of horizontally laid courses of large slabs, each course partly resting on the one below it and partly oversailing it so that with each course the diameter of the roof diminished, until finally the vault was closed by a single capstone six metres above the floor. The outer ends of the corbels were buried in the cairn and were tilted slightly downward; this served to throw off the rainwater percolating through the cairn. It was a most effective weather-proofing and kept the chamber dry even in prolonged bad weather except in a few spots, now cured. 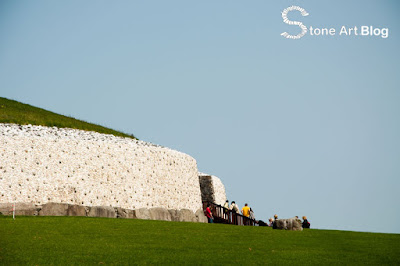 It is known that the white quartz, which was found on the ground in front of Newgrange during excavations, was not originally placed there by the builders. Some of the kerbstones which had fallen forward some time after the construction of the monument were found to be directly in contact with the subsoil, with no quartz beneath them. The reconstructed façade of Newgrange is controversial - many people feel that it is only an educated guess as to what the original tomb looked like. The reconstruction also cut away some of the mound so that visitors can walk around the carved kerbstone, rather than having to climb over it.
Professor Frank Mitchell suggested that the monument could have been built within a space of five years, basing his estimation upon the likely number of local inhabitants during the Neolithic and the amount of time they would have devoted to building it rather than farming. This estimate was however criticised by M.J. O’Kelly and his archaeological team, who believed that it would have taken thirty years to build at the very least.


In the later centuries following the initial construction and use of the passage toumb at Newgrange, ritual practices changed but the site remained an important ritual focus. As elsewhere in Ireland and Britain, rituals shifted from the enclosed spaces of megalithic tombs to large open air enclosures called ‘henges’. Henges derived their name from the ultimate henge – Stonehenge – but were more typically formed from circular earthen banks, circles of pits, circles of upright timbers, or circles of upright stones (without the famous horizontal lintels that Stonehenge possesses.)
The passage tomb was rediscovered in 1699 when material was being taken for a road building project, a local landowner, Charles Campbell, ordered some of his farm labourers to dig up a part of Newgrange, which then had the appearance of a large mound of earth, so that he could collect stone from within it. The labourers soon discovered the entrance to the tomb within the mound.

I must admit, I have been living in Dublin for over two years now, and I have only recently made the 45minute trip by car to Newgrange. I would definitely recommended making the trip if you are in the area, or even just visiting Dublin.
Admission to the chamber of Newgrange for the Winter Solstice sunrise is by lottery. Application forms are available at the reception desk in the Brú na Bóinne Visitor Centre, where there is a special post box for completed application forms. There were 31,531 applications submitted for the 2011 Winter Solstice Draw. Application forms are now available for the 2012 Solstice Lottery Draw which will take place on September 28th 2012.
For more information on tours check out http://www.boynevalleytours.com/
For more informtion on Newgrange check out http://www.newgrange.com/
Thanks to Michael Fox from Boyne Vally Tours for the use of the photos from his website for this post.
Posted by Stone Art's Blog at 2:38 PM