Many of you may already be familiar with the work of Jeffery Bale, but for those of you who aren’t, I feel the need to share his work with you. I am a big fan of mosaics. One of my favourite city to visit is Barcelona, mainly because of all the wonderful mosaics of Gaudi that decorate much of the city. I have even ventured to make a few mosaics myself upon occasion (see my blog post on making mosaics) but nothing as large, detailed or impressive as the mosaics of Jeffery.

For Jeffery Bale, gardens and stones are not just his passion and his livelihood, they are instilled in his blood, passed on through a family history of gardeners and geologists. Quite possibly on some kind of subconscious level, these family genetics helped pave the way for his future carer. Jeffery likes to think so anyway. It would also explain why he developed a passion for these traits at a very young age.


Following his passion for gardening, Jeffery graduated with a degree in Landscape Architecture from the University of Oregon in 1981, but after a short stint working a desk job designing for a landscaping firm, Jeffery felt the need to get his hands dirty.


He spent the next few years experimenting in friends gardens and gaining onsite experience, before in 1987 deciding to set out on a sort of mosaic pilgrimage, to go and see the gardens of the Alhambra in Granada and ParqueGuell in Barcelona as the images of these places had mesmerized him back in college, and stayed with him long after.

Jeffery began his ‘mosaic pilgrimage’ travelling to Madrid in Spain  and then on to Lisbon, Portugal, and like any good pilgrimage, it didn’t take him long to have an epiphany.  Here, standing in a city encrusted in mosaics made from small hand split blocks of white limestone and black basalt,  every plaza and sidewalk had a different design, everywhere he went he was looking at marvellous decorative pavements, something he had never seen back home. So this was it. Jeffery Bale from of Eugene, Oregon, USA felt destined to return home to America to replace its concrete pavements with stones and jewels.


So when he returned home he set to work on a patio for his newly purchased home in N.E. Portland.  His design was inspired after reading the ‘Tao of Physics’ by Fritjof Capra.  Not really knowing the methods of construction in Spain, he developed his own technique, setting the pebbles in a bed of wet mortar. 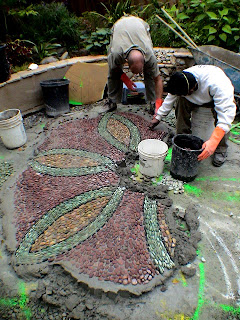 From here Jeffery honed his mosaicing skills by creating mosaics whenever the opportunity arose, mainly making mosaics for friends and family.  It wasn’t until a few years later that he convinced a client in Northwest Portland to let him build a pebble mosaic patio for him, along with a mosaic path and parking strip pavements.  The patio is a 12 by 18 foot Persian Carpet. This patio would later be photographed by Alan Mandell and Jerry Harpur of England, being published several times, and even making the cover of Landscape Architecture Magazine in August of 2005.
Suddenly Jeffery was not just a garden designer anymore, he was bonafide pebble mosaic artist as well, meaning that he could frequently incorporate these lovely mosaics into many of his projects.
Looking at one of Jeffery’s mosaic creation, one can begin to appreciate the time and effort that must have been put in to create it. Each stone has been carefully placed by colour, shape and size to fit into these wonderful shapes and patterns. But what one might easily overlook is that every single stone in each mosaic has not only been laid by Jeffery, they have also been painstakingly picked by him.


"I’ve spent a fair amount of my adult life gathering the materials needed to build these mosaics.  Each pebble is selected for shape and sorted by color, whether beach combing or sitting on piles of rainbow rock in a stone yard.  I have to look at every single one to discern whether it will fit amongst the thousands of it’s brethren."  Jeffery Bale

One of my personal favorite pieces by Jeffery is actually the footpath below. It makes up part of a number of mosaics around one of his clients houses. The group of mosaics are inspired by the paintings of Spanish painter Joan Miro (including the mosaic 'Mother giving birth with the moon in her hair')
I love the simplicity of the footpath. The skilfully arranged Molalla flagstones are cut and tightly fitted together, with the gaps filled with pebble mosaic which connects to the other Miro inspired mosaics in the garden.  Jeff also cleverly incorporated gaps between the rectangle pads to allow for permeability in the pavement, and for the garden to flow through the work in planted lines.


The ‘mosaic pilgrimage’ that Jeffery set out on back in 1987, is in fact one that he continues throughout his career. When ever the opportunity arises Jeffery sets off to get inspired by the different cultures and mosaics from around the world.
Looking through his portfolio of work you can see much of what he has taken back home with him from socking in these different cultures.

Jeffery has a wonderful blog that I recommend checking out. In his blog Jeffery documents his ‘mosaic pilgrimage’ sharing many of the wonderful mosaic sites, architecture, culture and mind blowing colours from around the world. http://jeffreygardens.blogspot.com
There is much more amazing work by Jeffery that I was hoping to share with you, but as this post is starting to get quite long I will leave it at that. To see more information about Jeffery and more photos of his work check out his website http://www.jeffreygardens.com. 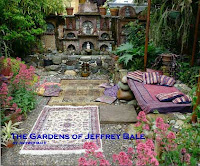 For a more complete and comprehensive look at Jeffery's work, I highly recommend getting a copy of his self-published book 'The Gardens of Jeffery Bale' This book along with other publications by Jeffery can be ordered online through the following link Books by Jeffery Bale

And don't forget to check out his wonderful blog http://jeffreygardens.blogspot.com.

Thanks to Jeffery Bale for his kind permission for the use of the photos and writings from his website and blog for this post.
Posted by Stone Art's Blog at 12:47 PM