Stone Chairs. Some ancient some not so ancient…Yet…. 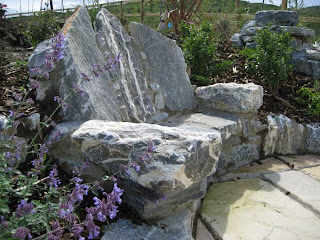 One of my favourite things to build is stone seats. There is something very special about sitting in a stone seat, it feels very grand, almost throne like. When building stone seats, a portion of my time is spent sitting, making sure that they are comfortable and positioned right. I must admit I have on occasion sat there wondering ‘will this seat still be here in a few hundred years. Will archaeologists be examining it to try and discover what kind of ceremonial uses it once had’ I like to think so!

(I often wonder the same thing about standing stones, Ireland is dotted with standing stones, and in recent years I have noticed it has become a very popular feature in new homes to have a standing stone in the front garden . What is to say that people weren’t doing this a few hundred years ago, maybe one day while building his mud hut, Séan decided to stick a big stone on its side as a nice garden ornament only to have archaeologists hundreds of years later declare it and sacred monument and document it in their books.)

This brings me to the other thing I love about stone seats. There is a rich history of stone seats in Ireland, dating back hundreds of years. Here are some of my favourites. 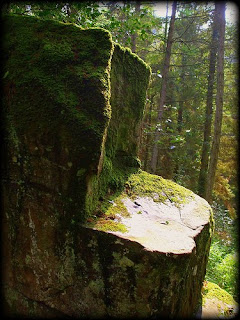 St Patrick’s Chair and Well (also known as the Druids Chair and Well or St Brigid’s Well or St Brigit’s Well) lies within Altadeven Wood, not far from the Ulster Way footpath. The chair is a huge 2m high stone block, shaped like a throne. The Well, which is said to never run dry is another rock, buth this one has a 25cm bullaun, or depression in it. This is filled with natural water. According to folklore, the water within such depressions or bullauns has healing powers and this well is supposed to be good at curing warts. 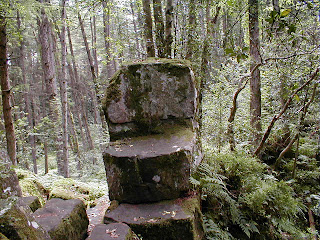 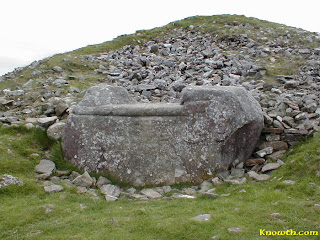 At the hill top cairns the Cailleach Bhéarra plays a prominent role with regards to stone chairs. In the north, where passage tombs occur, her seats would often stand in the vicinity of these Neolithic structures. A splendid rock chair of the Cailleach is the decorated kerbstone at the main cairn at Loughcrew, County Meath. In a place called ‘The Spellick’, not far from her home on Slieve Gullion in County Armagh, she has another stone seat. Until the early decades of the twentieth century, communal harvest gatherings took place at the Spellick on Bilberry Sunday, and people would sit in the chair as part of the festivites. 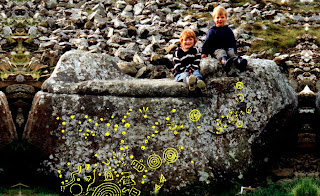 Áine's Rock Chairs aka The Mad Chair of Dunany
.. a great stone called "the chair of Aine, or the chair of the lunatics," was located, possibly still is, near Dunany, and the people generally believed that lunatics, actuated by some insuperable impulse, if at liberty, usually made their way to this stone, and seated themselves thrice upon it; and it was generally believed that after having performed that ceremony they became incurable. It was also considered a very dangerous act for persons of sane minds to sit upon this stone, lest they too might become subject to the power of Aine, that is, become affected with lunacy.

The human race were not the only beings supposed to have been affected by the mischievous Aine, since rabid dogs even were said to have come from many parts of the country and flocked around this stone, to the great danger of the neighbours and their cattle: when they remained around the lunatics' chair for some time, they then retired into the sea, as if compelled by some potent invisible power, and the people supposed that they were forced to visit the submarine dominions of Aine, since they were entirely under her subjection.
Posted by Stone Art's Blog at 12:45 AM