Blackthorn, Shillelaghs and the tree of the fairies, the Hawthorn 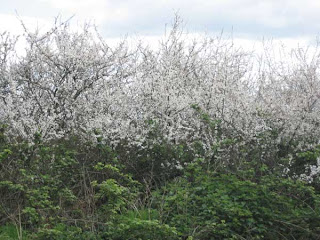 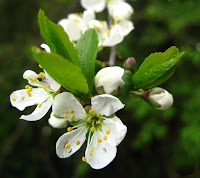 Anyone driving on any country roads in Ireland at the moment will have noticed the beautiful white flowers of the Blackthorn, which has exploded onto the stage over the past few weeks.


This native Irish tree may be known by its Latin name Prunus spinosa or one of its many common names, such as sloe, wild plum, wishing thorn or mother of the wood. A close relative of cherries and plums, Blackthorn is a deciduous small tree or large shrub, growing up to 4 metres high at a medium growth rate. It is often found growing wild in hedgerows, on the edges of wooded areas or popping up on rough farmland.
The Blackthorn gets its name from its black bark, this bark is sometimes used to make an ink.

The five petalled, snow white flowers of the Blackthorn are at their best from March through April. The blooms appear before the leaves unfold (this is one of the easiest ways to tell the difference between Blackthorn and Hawthorn)


It's flowers before leaves for Blackthorn and leaves before flowers for Hawthorn. 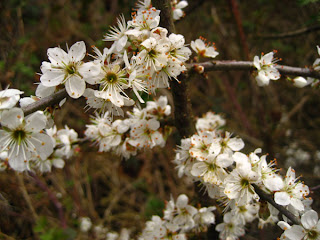 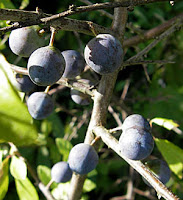 The early Blackthorn flowers are followed by the finely serrated, dull-green oval leaves, which in turn are followed by blackish purple sloes in autumn. Sloes, the fruit of the Blackthorn, are extremely sour and are sometimes used for flavouring sloe gin.

The thicket like growth combined with Blackthorns notoriously vicious woody thorns, and the ability to re-grow quickly after cutting makes for an ideal stock proof new hedging material or as a replacement plant for existing hedgerow gaps.
Blackthorn is very valuable to birds as a nesting site. Blackbird, song thrush, finches, common whitethroat and wood pigeon are among the more common users.


The wood of the Blackthorn is both hard and light weight, this makes it is ideally suited to the manufacture of clubs/walking sticks. These sticks are known as ‘Shillelaghs’ and are better known as part of the Irish cliché ‘shamrocks and shillelaghs’ 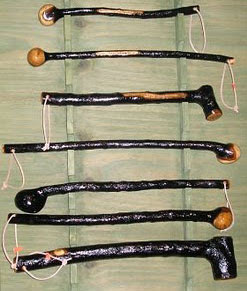 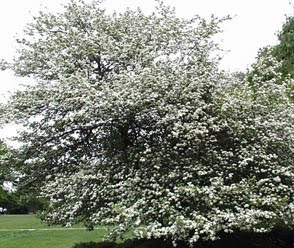 The Hawthorn, or by its Latin name Crataegus monogyna, also known as Quickthorn, Whitethorn, or the May tree, is one of the most common small trees/large shrubs grown in Ireland. It is sometimes grown as individual trees, but it is more common to see it grown in a closely planted row as a hedge or screen. It is the ideal candidate for this, as young hawthorn plants grow strongly with many thorny branches and side-shoots. This quickly forms a thicket, which makes for a virtually stock-proof hedge.

A bushy tree, Hawthorn grows on average, to a height and spread of 6 metres.
Unlike Blackthorn whose stems are dark, the stems of Hawthorn are light grey turning to a pinkish brown colour with age, which is also when characteristic filled cracks start to appear up along the trunk. Most of the young twigs sprouting from the tree emerge red before going through these colour changes.
The glossy green leaves are between 20 to 30mm long and are divided into 3, 5 or 7 deeply cut lobes. The tree comes into leaf at the end March. 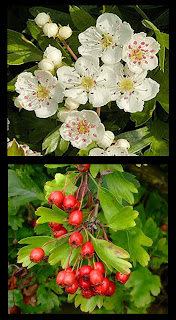 It is in flower from May to June with 5-petalled white flowers, which unfortunately have an unpleasant smell to some. You see, up close the flowers have a faint scent of rotting meat. This allows pollination of the flowers by flies rather than bees which are not active in early spring, its blooming time.

By September lots of red berries appear, these berries are known as ‘haws’. Birds will feed on these through the winter and so can we, although they don’t really taste of very much. They are dominated by a stone, which must not be cracked when eating the flesh of the berry, but they can be roasted and ground into a coffee substitute. The stone is often made up of several segments which tend to fuse together to appear as one. The berries are mostly used to make jams, and fruit leathers.

Our native tree of the fairies 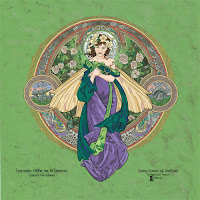 In Irish myths and legends, there are many references to Hawthorn or Whitethorn and its connection with the fairy folk. It was once believed that to place a sprig of fairy Hawthorn in your milking parlour would cause your cows to supply extra pints of creamier milk.

It is also said that fairies who gather around a thorn tree are thought to be earth spirits and as a precaution no evil thing is ever said of them for fear of retribution. The old belief that any damage done to their trysting tree will bring misfortune to the doer has not died out and farmers still laboriously cultivate around them. In several instances it has been impossible to persuade workmen to remove a thorn tree from the route of a new road or footpath (as the picture below of a Hawthorn from somewhere in rural Ireland clearly shows), and there is widespread belief that to cut a thorn would bring ill luck on the person 'injuring' the tree and possibly death.* 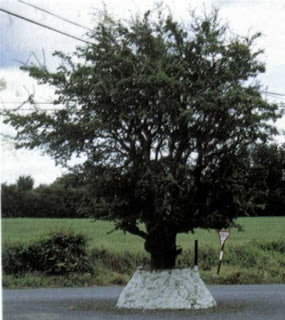 Another use of the Hawthorn in Irish myths and legends is a Hawthorn known as St Ciaran's Bush. Ciaran was a fifth century saint who founded a monastery here. 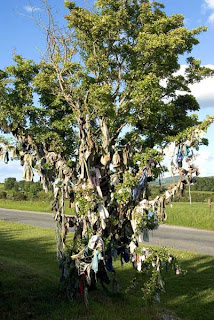 Located at Clareen, east of Birr in the midlands of the country, the lonely Whitethorn is dressed in clothing rags (giving it its more impertinent name, the rag bush). It is believed that the bush cures illness and answers prayers, so when a piece of the persons clothing is placed on the bush, once the rag has rotted to nothing, their prayers and intentions will be answered. (It is also believed by some that the increase in the bush's use over the last few years is a reflection of the state of medical services in Ireland)

The tree does not appear to be particularly old, but it has been confirmed that the same bush has been decorated for at least 40 years. It is likely that the present tree replaced an older one.
The local people helped to preserve the tree when it was in danger of being felled due to the realignment of the road some years ago. It now stands on an island of grass, surrounded by low white railings, the old road on the west side, and the new road on the east.*