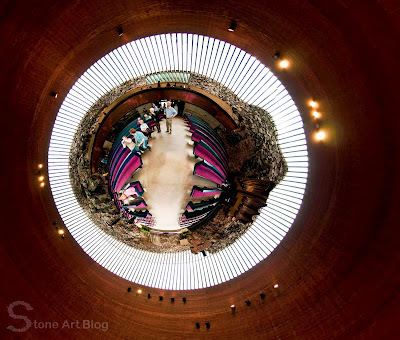 Last September my wife had to go to a conference to Helsinki, Finland, so I decided to tag along and see what Helsinki is all about.
On arriving I quickly noticed that much of the buildings and stone walls in Helsinki are made of a lovely pink granite. If you had a geologist to hand he would tell you the reason for this is because Helsinki sits on an indented Pegmatitic (pink) granite peninsula that makes up part of the Baltic shield. I did not have a geologist to hand, but walking in some of the many green areas in Helsinki, large outcrops of this rock were poking out of the ground everywhere I looked.
Most of the buildings built with this stone are highly manicured and well dressed. The central train station and the parliament buildings are fine examples of this. One building that I was very much taken by was a place called The Temppeliaukio Church or The Rock Church.
A stark contrast to the well dressed pink granite buildings around Helsinki, the rock church is rugged and unmanicured.
Temppeliaukio Church is a Lutheran church in the Töölö neighborhood of Helsinki. The project comes from an architectural competition won by the architect brothers Timo and Tuomo Suomalainen in 1961. The design of their project was recognized by the jury as “completely original” and respectful of the competition goal to “include the organization plan to keep as much of the giant granite outcrop that makes up Temppeliaukio Square intact.”
Their original solution to saving the square was to have the interior of the church site excavated and built into the rock. It dawned intuitively on the Suomalainen brothers when they visited the building site that in order to save the character of place, the rock itself had to be understood as a church and everything built at the site should be adjusted to accompany the character of the rock.

Before the Suomalainen brothers started designing the Temppeliaukio Church, they had done planning work for the Ministry of Defence and thus had become familiar with rock building. 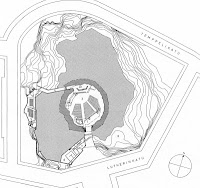 The brothers' aim was to locate the floor of the sanctuary at the level of the widest and highest street, Fredrikinkatu Street, which ends at the square. This required the church hall to be cut into the bedrock. As a result this leads the visitor to the sanctuary without the need to climb stairs, simultaneously offering a friendly rather than overbearing experience of the church space.
The 24m diameter roof is made up of a copper plate-covered dome, using a impressive 13.6 miles (22 km) of copper plate strips. The dome is connected to the natural rock wall by 180 window panes that let in natural light. Due to the varying height of the rock wall, each glass part of the roof is different in size. 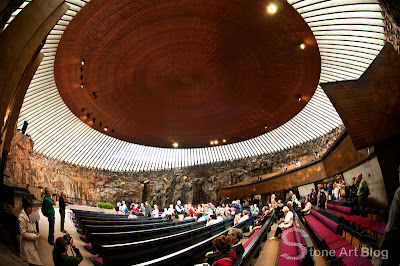 As a result of the natural slope of the bedrock walls, the glass panes above the altar area are bigger, allowing the altar to become more illuminated compared to the other parts of the sanctuary
The colour scheme of the interior was based on the  red, purple and grey shades of granite. The metals were also carefully selected to match the colours of the stone. Steel, made bluish by hammering, non-oxidised copper for the entrance doors as well as for the front facing of the gallery and interior of the dome, concrete left in its raw state. 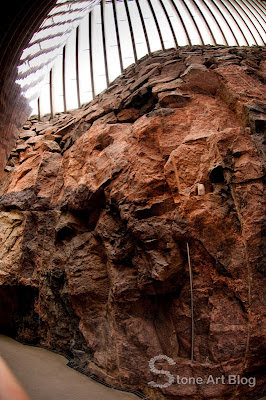 The brothers' vision was for the church to have a strong connection with nature and its surroundings, and they wanted the natural rough quarried stone to have a leading role in creating the atmosphere inside the sanctuary. To achieve this the bedrock walls were left rough, with all drill markings from the quarrying visible, while the resulting quarried rock was stacked on top to create the rest of the walls that continue out and over the park surface.
Aside from the aesthetic and structural benefits, an additional benefit of the solid rough walls is its acoustic qualities, and with a seating capacity for 940, it is no wonder that the church is also a popular concert venue. 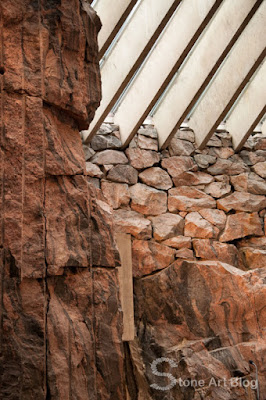 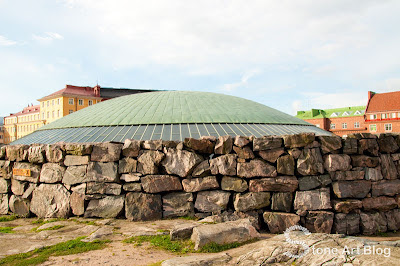 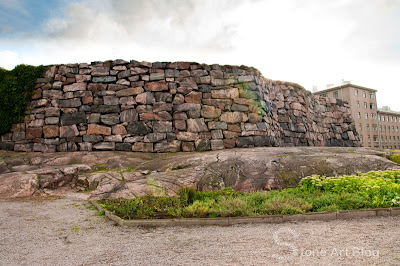 Located right in the heart of Helsinki, The Temppeliaukio church is one of the most popular tourist attractions in the city, with half a million people visiting it annually. Lots more great photos of the church can be seen here. If you would like to see more photos of various stonework I came across on my trip to Helsinki you can check out my flickr album.
Posted by Stone Art's Blog at 1:38 PM