Stargazing in the garden 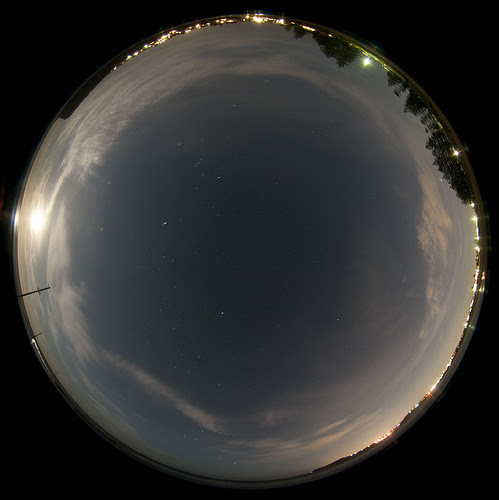 photo © 2011 Nigel Howe | more info (via: Wylio)
I have always been fascinated by the night sky, and can happily sit in the garden staring into the vastness of space till the crick in my neck becomes unbearable. I am also a sucker for all those National Geographic specials on all the amazing things happening around us in space. The expansion of space, the exploration of planets, the inevitable extinction of our own planet, all these things float around in my head as I stare up into the night sky.


So you can image that when I came across these beautifully hand crafted garden telescopes by Telescopes of Vermont , I have been dreaming about having one ever since. What a wonderful addition this would make to a garden!

I also really like the story behind these amazing telescopes and the little family business that reproduces them.


The garden telescope was the brainchild of a man called Russell W. Porter, also known as the father of amateur astronomy in America, and founder of the Springfield Telescope Makers and instructor at MIT. He designed the garden telescope in the 1920s. Little did he realise that his innovations in design would later also apply to the 200 inch Hale Telescope at the Palomar Mountain Observatory, an observatory he helped to design. 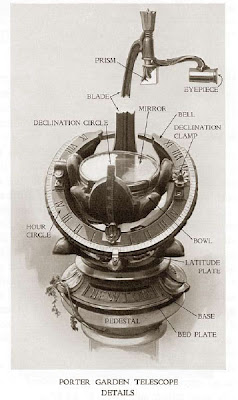 The Porter Garden Telescope was conceived as both a superb optical instrument and a beautiful example of Art Nouveau Design.  It is the clever and artistic reconfiguration of a reflecting telescope more familiarly housed in a tube with an eyepiece projecting from the top. 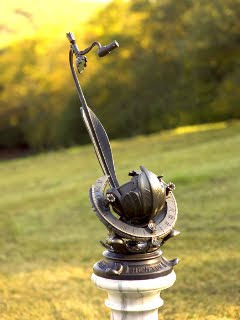 In the case of the Porter Garden Telescope, the tube has become a bronze ginger leaf which holds the exposed optics in place. The optics lift out in seconds, leaving a graceful installation which can reside outdoors permanently as a distinctive centrepiece to a garden. 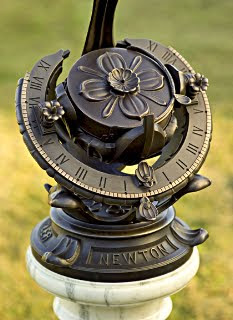 With the optics removed, it is also a clever and unusual sundial. When the blade is pointed at the sun, the correct time is indicated on the hour ring. It is also a wonderful educational tool for demonstrating the relationship of time and solar position.

This masterpiece of design may easily have been forgotten about, as its designs sat for almost eighty years collecting dust in the attic of The Smithsonian Museum, only to be rediscovered by fellow Vermonter Fred Schleipman.

Thirty-five years ago Fred Schleipman, engineer and avid amateur astronomer, photographed a solar eclipse in Mauritania with an expedition of like minded individuals. There he befriended Bert Willard, an optical engineer, fellow stargazing enthusiast and member of the venerable Springfield Telescope Makers of Springfield, Vermont. Prior to joining the club, Schleipman visited their museum where he saw their collection of antique telescopes and rare documents. Among the treasures was an original Porter Garden Telescope. Schleipman was instantly smitten, and so began the dream to reintroduce, from obscurity, a historic and beautiful instrument.


His crusade held many hurdles, the first of which was to find an original, from less than twenty, which he could borrow for patterning. The Springfield Telescope Makers had been approached in that regard many times, but staunchly non commercial, and covetous of Porter’s reputation and their own, had many times declined the request. They finally reversed that stance, convinced that with Schleipman came the assurance that an instrument worthy of their endorsement would result. An original procured; the more daunting technological hurdles loomed: engineering, patterning, casting and machining.

Schleipman commented that working with the castings, though they are new, is a bit like restoring a Rembrandt. He is reverential of the craftsmanship reflected in the bronze pieces, and is thankful to have found skilled artisans capable of such delicate work in an age when this calibre of artistry is disappearing.

Currently there are twenty five of these telescopes in the world. An original resides in the Smithsonian Institution.
For now I will continue dreaming about having number twenty six.

In the meantime while I wait for my lottery winnings, I may take a leaf from Dan Snows book and build myself something like this little project he made for a client recently. He was asked to build a place where his clients could take their sheep skins and lie out and stargaze in their garden. Check out Dan’s post about this little project here.

Thanks to Russ Schleipman for sending me on the information and photographs for this post (may your business thrive, so you can continue to produce these masterpieces for generations to come.) Thanks also to Dan Snow for giving me permission to use the photos of his ‘sky watch’ bench.
Posted by Stone Art's Blog at 5:55 PM