Stone art in its most gigantic of scales. The Crazy Horse Memorial 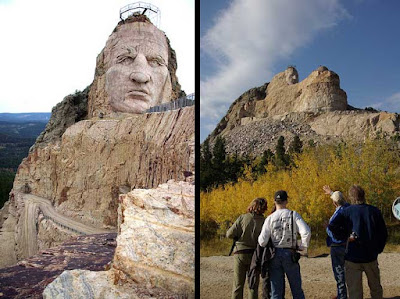 Here is some stone art in its most gigantic of scales.


I recently saw this monumental piece of stone art on the telly and was very intrigued.

Just down the road from Mount Rushmore (an icon of North America) it is quite amazing to see one of these monuments being sculpted.

The Crazy Horse Memorial is a mountain monument under construction in the Black Hills of South Dakota, in the form of Crazy Horse, an Oglala Lakota warrior, riding a horse and pointing into the distance.

The memorial consists of the mountain carving (monument), the Indian Museum of North America, and the Native American Cultural Center. The monument is being carved out of Thunderhead Mountain on land considered sacred by some Native Americans, between Custer and Hill City, roughly 8 miles (13 km) away from Mount Rushmore.

The monument has been in progress since 1948 and is still far from completion. When finished, it will be the world's largest sculpture. 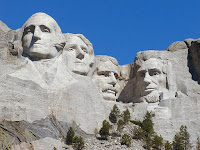 The mountain carving was begun in 1948 by sculptor Korczak Ziółkowski, who had worked on Mount Rushmore under Gutzon Borglum in 1924. In 1939, Ziolkowski had received a letter from Chief Henry Standing Bear, which stated in part "My fellow chiefs and I would like the white man to know that the red man has great heroes, too."
The memorial is a non-profit undertaking, and receives no federal or state funding. Ziolkowski was offered $10 million from the federal government on two occasions, but he turned the offers down. Ziolkowski felt the project was more than just a mountain carving, and he feared that his plans for the broader educational as well as cultural goals for the memorial would be left behind with federal involvement.

Ziolkowski died in 1982. The entire complex is owned by the Crazy Horse Memorial Foundation. Ziolkowski's wife Ruth and their ten children remain closely involved with the work, which has no fixed completion date. The face of Crazy Horse was completed and dedicated in 1998. 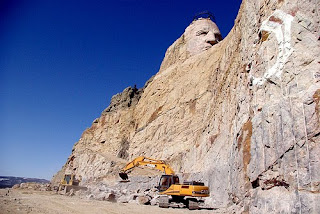