I'm an alien I'm a legal alien, I'm a Gunnera in West Cork 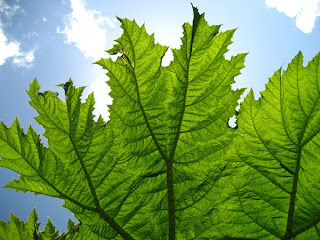 Well without trying to upset anybody, I have to admit that Gunnera is one of my favourite perennial plants. This might be upsetting for some as there are people out there with a very strong opinion about them, but I will talk about that later on in the post. First I want to talk about the plant itself. 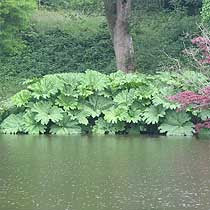 Gunnera is believed by some to be poisons, I even remember hearing this when I was young. So far I can not find anything to back that up, and it is not listed in the RHS toxic plant list.
Gunnera is a common sight in Ireland, however it is in fact an alien species and is actually a native to Chile and Argentina. There are two main varieties in Ireland Gunnera tinctoria and Gunnera manicata. It is important not to confuse them, Gunnera manicata is the most common one sold in garden centres where as Gunnera tinctoria is the one often found in the wild and has become very invasive and is hated and feared by many in the west of Ireland. 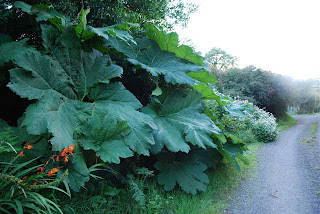 The one I have photographed here is the Gunnera manicata also known as Giant Rhubarb or Dinosaur Food. 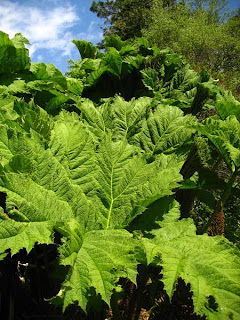 This impressive deciduous perennial will eventually produce huge displays of massive dark green lobed foliage, so you need plenty of space! The architectural leaves grow up to 6 feet across. They are rounded and deeply toothed, and sit atop prickly stalks that extend to 10 feet tall and form giant clumps. Gunnera manicata produces large, bottle-brush spikes of tiny reddish-green florets in the spring. It looks best planted near water in an informal semi natural setting. 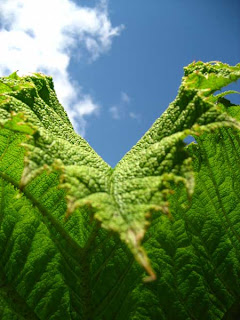 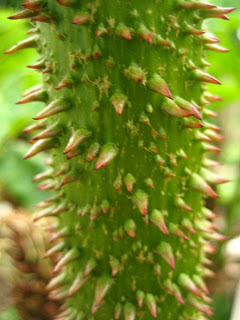 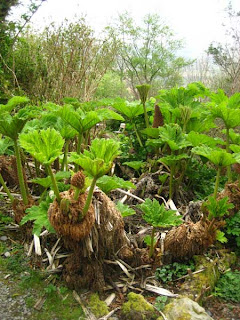 An established Gunnera manicata can grow amazingly quickly in the spring as the shoots appear from the crown, this is one reason why they need to grow in a moist soil full or organic matter to supply a steady supply of water to fuel such a high rate of growth. On a warm spring day you can watch the amazing growth of a Gunnera over just a few hours as the leaves unfold and the stems extend and its gigantic green leaves spared out, creating fantastic solar collectors. The leaves’ undersides are also covered with spikes, as are the leaf stalks. The upper surface of each leaf is heavily textured, and the leaf’s contoured shape serves to catch and channel water to the plant’s roots. 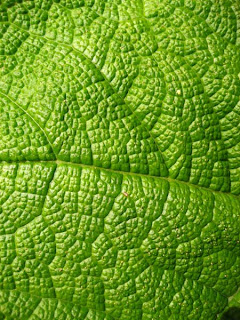 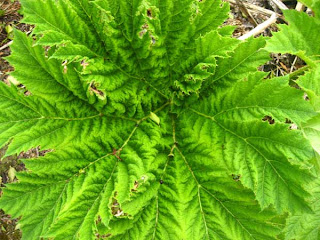 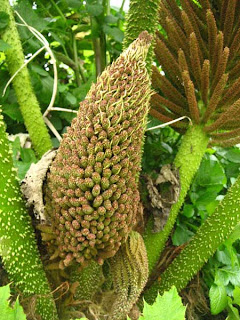 At the macro-/microscopic level, when growing in nitrogen deficient soil, Gunnera manicata plants develop stem glands. The plants then form a symbiotic relationship with a nitrogen-fixing Cyanobacteria (Nostoc punctiforme). The bacteria enter the plant through these stem glands found at the bases of leaf stalks and then trigger an intracellular symbiosis, giving the plant fixed nitrogen in return for taking some of its fixed carbon for the bacteria’s metabolism. This “in-between-plant-cells interaction” is unique in higher plants, and may help plant scientists initiate novel symbioses between crop plants and cyanobacteria—allowing specific plants to grow in areas lacking fixed nitrogen in the soil. At present, Gunnera is the only genus of angiosperms (flowering plants) known to host Cyanobacteria (formerly called Blue-Green Algae) 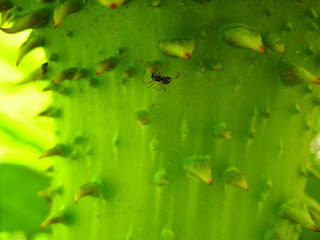 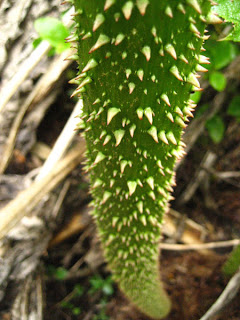 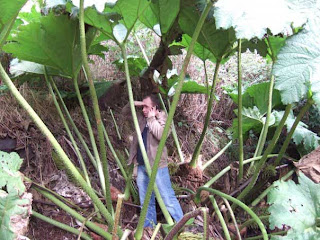 So the other day when on an Irish gardeners forum, I came across a question posted by a user on When is the best time to cut the leaves off a Gunnera to place over the crown to protect from frost? (Best just to fold the dead leaves over the crown, if you are wondering)

What amazed me was some of the replies he got. He was told by one user that Gunnera is an invasive species and that he should remove and destroy the plants he has immediately. Another person wanted to know why the Dept. of Agriculture does not demand licences for having them on a premises. Well I could give you some more examples, but I think it is safe to say that there are some strong opinions out there. So before people start declaring all out war on the Gunnera, it needs to be said that it is the Gunnera tinctoria that is the invasive variety and not the larger Gunnera manicata. 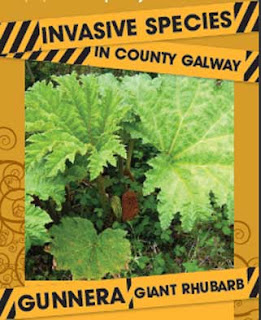 This is of course an easy mistake to make when you see pictures like this.
The Gunnera tinctoria is however becoming a serious problem for many people in the milder west cost of Ireland and there are some people who believe that As soon as the average temperature goes up just 1 degree, Gunnera will take off right over Ireland, and that we will be beating them back to get in our front door. 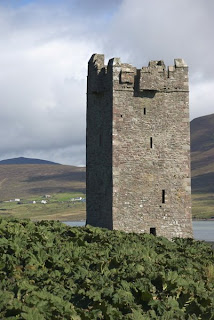 Gunnera tinctoria  outside Kildavnet Tower on Achill Island, County Mayo
Here is my (slightly dramatised) depiction of what a global invasion my look like. 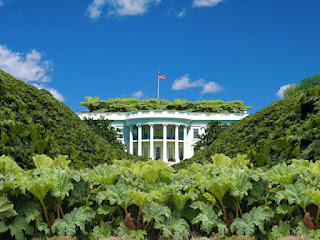 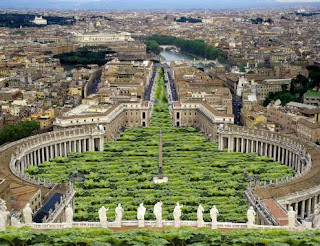 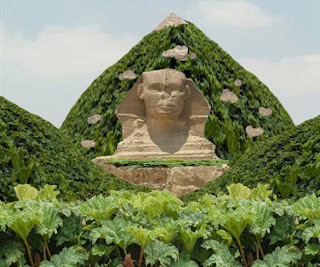 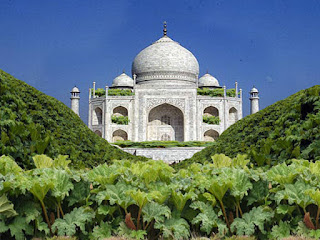 On a more serious note,
In New Zealand, where it is also invasive, there have been experiments with several herbicides for a number of years and aerial spraying over large areas has been conducted. The New Zealand Department of Conservation (DoC) have reported their suggestions on the control of Gunnera tinctoria. 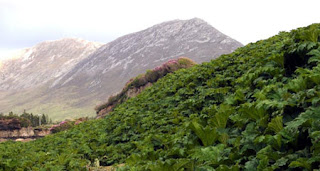 Letterfrack area of Co. Galway.
Mayo County Council, the Heritage Council, National Parks and Wildlife Services, the Biodiversity Fund and UCD have jointly funded a project to carry out experiments on the development of measures for the control of G. tinctoria.
Alongside the experiments a mapping project of Achill Island is being conducted. The mapping will provide a baseline for future projects to monitor its spread and the success of control. It will provide an insight into the habitats at risk of invasion, its means of spread and where prevention could be introduced as a means of control. 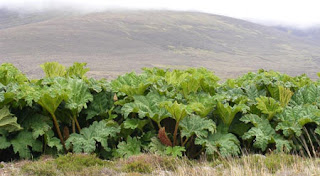 So hopefully I don’t get any angry emails form anyone for mentioning Gunneras or that I have ruined Sting’s ‘Englishman in New York’ song. Apologies in advance, I am not saying that everyone should run to there garden centres and get themselves a Gunnera plant, or that the global Gunnera invasion will or won’t happen. All I’m saying is good or bad, I think that the Gunnera manicata is a beautiful plant to admire.