During the summertime it is particularly a pleasure to drive down to the homestead down in West Cork. After spending many hours in the car, travelling on the wide motorways from Dublin, the narrow winding, pothole infested roads of the countryside are a welcome sight. The roads are about half the width they normally are in the winter as all the plant life competes for space. Although the roads are narrower, they do look fantastic as the glow with colour. And none glows with as much dominance as the fantastic Fuchsia. 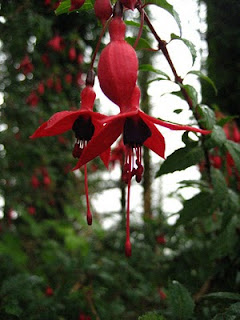 We have a lot of aliens down in West Cork, they all seem to love the mild moist climate that we have thanks to the North Atlantic drift. Now before you send Mulder and Scully down here, let me clarify, I am of course not talking about the bright green kind that fly around in space craft, I am talking about plants that are not native to this country. 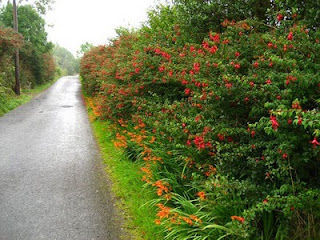 Red Fuchsia hedges with the orange glow another much loved and plentefull alien to Ireland Montbretia 'Crocosmia x crocosmiiflora'
Fuchsia magellanica 'Riccartonii', or more commonly known as the Humming bird fuchsia or lady’s eardrops is an icon of West Cork. Anyone who has visited West Cork in the summer time will have seen this amazing deciduous shrub illuminate the hedge groves all over the countryside. It is so iconic of west cork it image is used by many local companies and organizations. 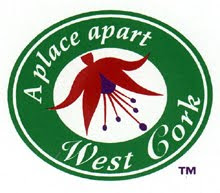 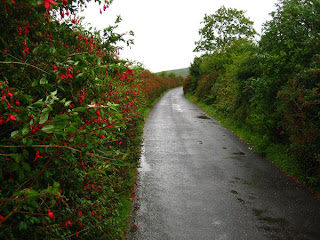 A native of Chilli, it was identified by Charles Plumier in the seventeenth century. Plumier named it after the German botanist, Leonhart Fuchs (1501-1566) 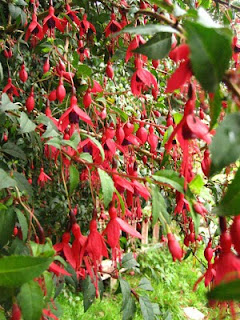 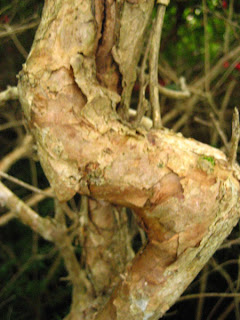 Fuchsia bark
This deciduous shrub will reach from about 1.5m to 2.5m high, and will favour coastal locations and rocky ground. Its flowers colour the hedgerows from July to October with their rich hues. The flowers (2cm long) are bell-shaped and have four violet petals which are surrounded by four large, pointed red sepals, rather like a ballerina with a crimson skirt, purple petticoat and long, slightly uneven, legs. The grey/green leaves are ovate and toothed and the fruits are black, fleshy berries in autumn. It should be noted that the black, fleshy berries of the Fuchsia are NOT edible. The branches of the fuchsia turn a pale, golden brown with age and its bark gets a lovely papery quality to it. 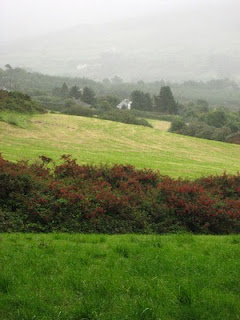 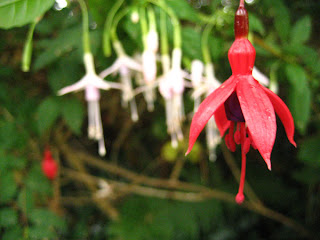 Fuchs ia magellanica 'Riccartonii'on frouunt of the White variaty, Fuchsia magellanica var. molinae (F. magellanica 'Alba')
If you would like to plant Fuchsia as an informal hedge, plant them 45cm (1.5 ft) apart in the spring. I mild areas like here in West Cork, Fuchsia magellanica can be grown quite easily through propagation, simply by taking cuttings from a mature plant in late autumn when the stalks are bare, and sticking them about 15cm into the ground.

Fuchsia flowers best on new wood so prune hard in spring, leaving just 15cm to 30cm (6in to 12in) of stem, from which new growth will shoot. Plants grown as hedges should be less severely pruned, although a portion of any old that may have been killed by frosted should always be removed. 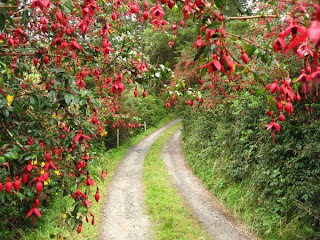 The Drive up to Hagal Farm
Here in Ireland we all are accustomed to a few dreary summer days, and even though it was one of these kinds of days when I was out taking these photos, the vibrant colours of the Fuchsia still keep the place looking hot and summery. 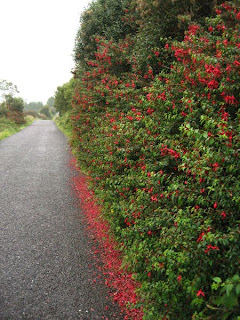 Throughout the summer, the Fuchsia continues to make new flowers, while the older flowers fall to the ground leavening just the small berry behind. As a result of this, by this time of the year you begin to see these lovely red carpets at the base of the plants. 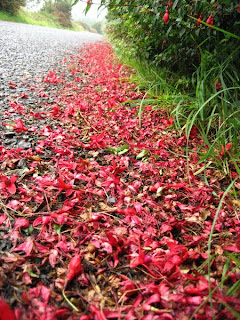 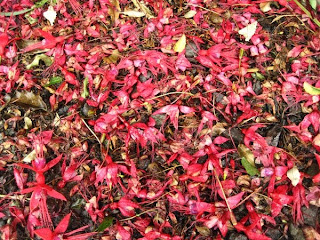 This Fuchsia is also popular with kids, as the flowers contain a pouch of sweet nectar. As kids we would often have purple and red lips as a result of drinking the nectar. The process you use to do this is, when you pick the flower, pull off the purple petals and stalks, hold the part where the petals were, up to your lips and squeeze the back of the flower to release the nectar. 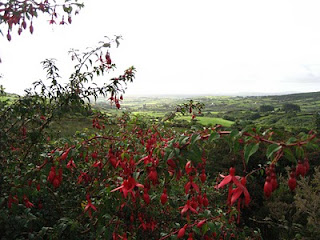 Fuchsia high up in the hills, with the faint silhouette of O'Donovan castle in the distance.
Posted by Stone Art's Blog at 10:34 AM