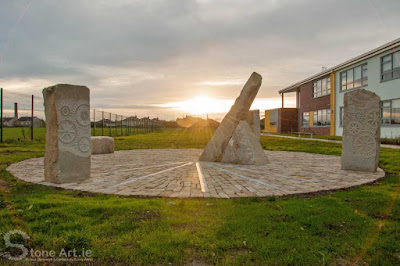 Earlier in the year I was commissioned under the Per Cent for Art scheme to create a sculpture for a secondary school in Drogheda Co. Louth.
The brief was to create a piece to commemorate the transition of the school from its humble beginnings into the new extensive extension, the sculpture is based on the subject of the movement of  time. 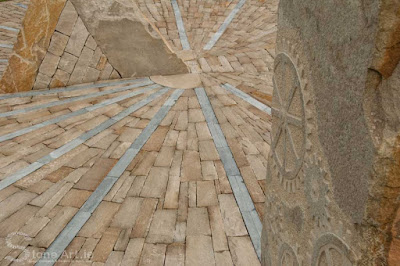 Our history traced through stone.

The permanence of stone means that much of what we know about our past has been discovered through examining the stone structures left behind by our ancestors, from structures and sites of worship to the dry stone walls that map out the history of the vernacular landscape of our countryside.  In the Drogheda area alone, more than 5000 years of history can be read through the many stone structures  that cover the landscape here, spanning from the Neolithic site of  Newgrange to the Norman beginnings of the town itself.  This Norman heritage is evident  in the earliest monument in the town which is the motte-and-bailey castle, now known as Millmount Fort.
'The Timekeeper'  sculpture pays tribute to this movement of time, recorded through stone.
From a distance the large vertical blocks of sandstone  take  on the appearance of a Neolithic structure. As you approach, the sundial element of the sculpture becomes apparent. 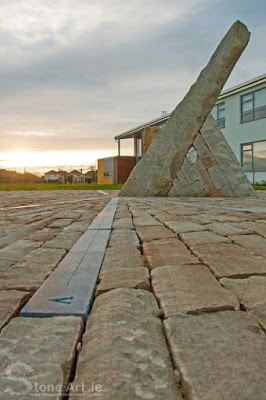 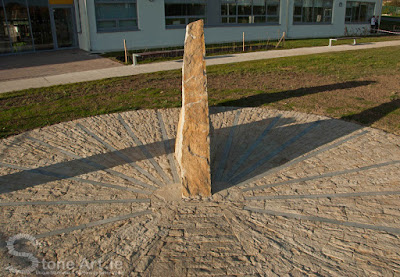 The large angled stone in the centre (gnomon) is angled parallel to the earth's axis, paying tribute to the first gnomon style sundials invented in the late 1300's. The bars of engineered limestone in the floor along with the relief carvings of cogs and wheels in the standing stones represent modern time.
The precision of the limestone markers highlights the slight fluctuation in the accuracy of the shadows cast by the Neolithic gnomon as the seasons change. This in turn highlights the contrast between the rudimentary time mapping of the neoliths with the sophisticated precision of modern engineered time. 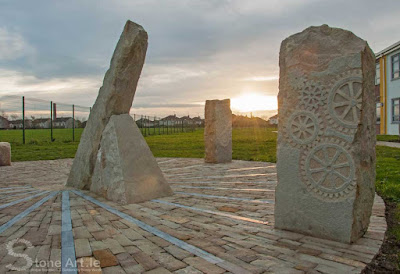 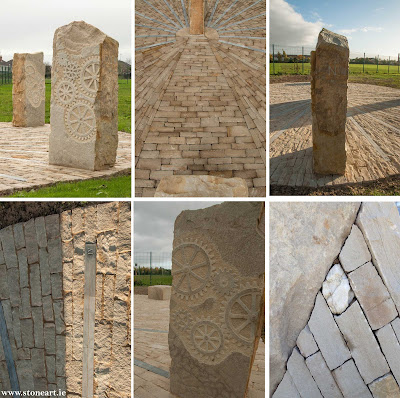 The stone seating area in the courtyard between the old and new buildings is an extension of the sculpture, with the time capsule placed  under the stone mosaic in the floor, a symbol of the school's confidence in its future. 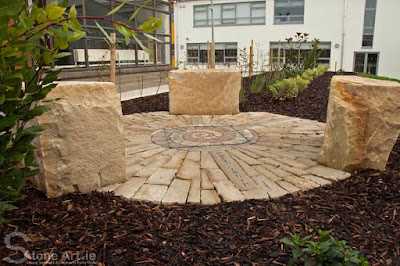 The stone for this project is sandstone and comes from Drimkeelan quarry in County Donegal.  Drimkeelan quarry is one of the oldest working quarries in the country. The Abbey of Assaroe was built in 1180 using this stone, so it is known that quarrying started around this time. A carved sandstone lamp found in the mines of the quarry suggests mining could have already started in the middle ages, by Cistercian monks who had abbeys to build.
The quarry also supplied stone for famous buildings such as The National Museum of Ireland, Leinster house(The Dail) and Stormont in Northern Ireland .
The piece of white quartzite built into the base of the gnomon links back to the white quartzite facade of the nearby prehistoric site of Newgrange.
How Sundials Work.

Sundials indicate the time by casting a shadow or throwing light onto a surface known as a dial face or dial plate.
The time is indicated where a shadow falls on the dial face, which is usually inscribed with hour lines.
The entire object that casts a shadow or light onto the dial face is known as the sundial's gnomon.
The gnomon is set parallel to the earth's axis. This angle is horizontal at the equator and increases to vertical (90⁰) at the poles. The angle of the earth's axis is dependent on your location and can be found by checking the latitude on your GPS coordinates. The latitude of Drogheda is 53.717856⁰.
As well as being parallel to the earth's axis, the gnomon also points to the pole (in this case the North Pole.) North, South, East and West are marked on the sculpture on the back of the standing stones and behind the seat stone. 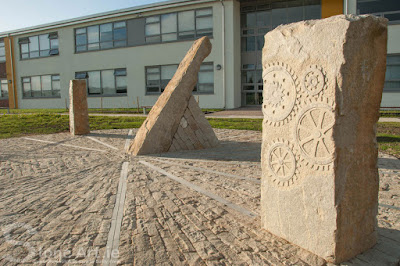 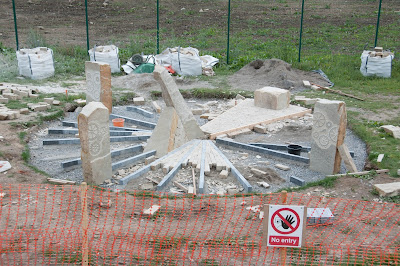 Like may stonemason's I usually work alone, however with large projects like this I am lucky to have a great group of friends from the DSWAI who I can call on. 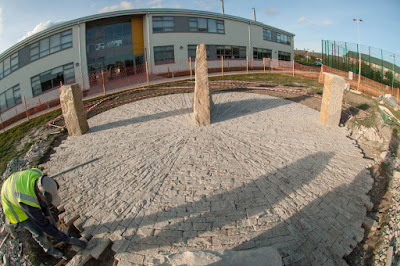 The dry laid pitched stonework was a very slow process with about 60m2 to be laid in total. Fortunately I had Karl Kennedy and Mark Gregan with me for this stage of the build. 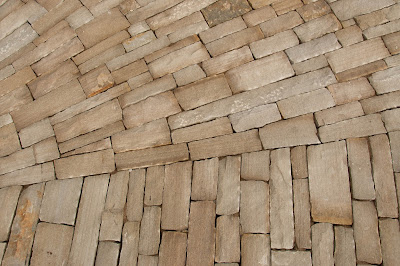 The majority of the stonework was laid in a radial orientation from the gnomon apart from one segment that connects the timekeeper's seat to the gnomon.
Scottish master craftsman Nick Aitken also stopped by for a few days to pitch in while over visiting for one of our trips to work on The Gathering of Stones monument which a number of us are involved in. 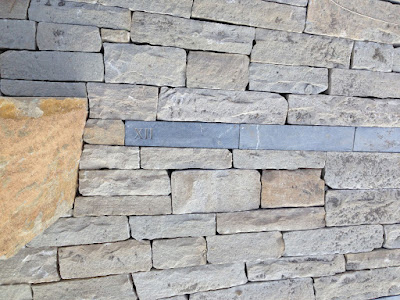 As is often the case when building something unique, this project ended up taking longer than expected, so the pressure was on to get it completed on time. It was a little surreal at times to be building a giant clock when you're under pressure to finish a job. 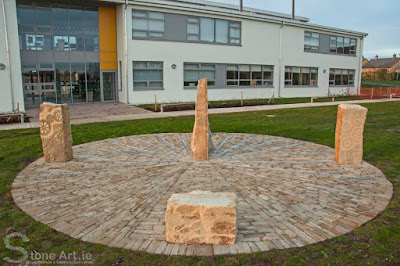 Thanks again to the great group of guys who helped me realise this project. It is great to see the praise it is getting, and the process of its construction will hopefully give some of the students in the school an appreciation for the craft and for the work involved in applying those skills. 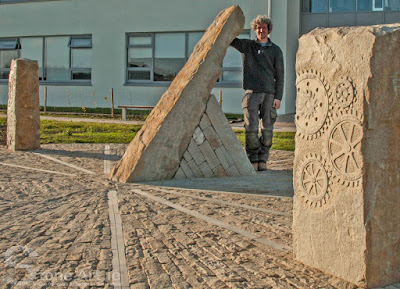