I am currently looking into organising a weekend workshop in live willow structures in West Cork, which has inspired me to write a post on the topic. I have always liked the ides of willow structures and am looking forward to the opportunity of creating one.

Willow has been highly valued since ancient times. The Celts considered it sacred. It has been used medicinally, as a dye plant, to make charcoal and as a timber. In more recent times, as we strive for green alternatives willow is undergoing a renaissance. One of its new uses is to create living willow structures.
Living willow has long been used for fencing. Once developed it makes a very strong and affective barrier for animals, because when willows are planted close to one another and twined together they will actually graft into one another. 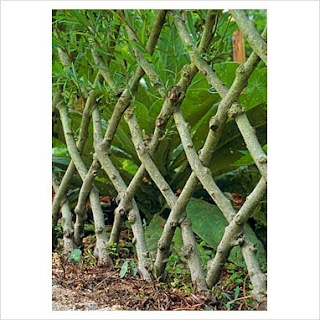 Live willow fences are still used in today’s gardens and can be a unique feature in any garden. Long un-rooted willow cuttings (whips) can be used to make these functional and attractive structures/barriers in the garden that will grow and develop throughout the years. For example, woven screens, arbours or bowers over seats, arches, tunnels, children's play domes (which could be interconnected with tunnels if you have the space), and then you could use them to support climbing plants such as roses, honeysuckle, golden hop or clematis.

Any variety with sufficient growth can be used but the faster growing varieties that produce long straight whips are best especially for larger structures. Viminalis varieties are probably the most suitable but others can be used for varying stem colour/leaf/catkin interest within the structure.

In Germany there is a company called Sanfte Strukturen, here they bring living willow structures to an entirely new level. Here is an example of one of there projects.
The Auer World Palace was built in March / April 1998 with 300 volunteers from all over the world.
Marcel Kalberer was assisted by builders, architects and artists, who guide the many different volunteers through the construction of the palace. 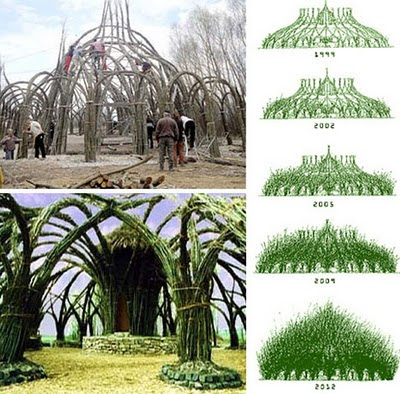 While the construction was a social event, the Palace itself would soon be used as a center for community festivities. The full moon events for example are already legendary and have drawn more than 80,000 visitors from near and far. Every event has its own character due to changing cultural activities and light installations.

As the first Living Willow Palace it became a very welcome and necessary tourist attraction in the sleepy countryside between Weimar and Naumburg.

If anyone would be interested in doing a weekend course in living willow structures in the West Cork, please do let me know.
Posted by Stone Art's Blog at 12:44 PM