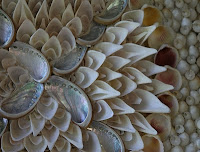 For anyone passing through Co. Cork, in Ireland who has a love for fantastic food and beautiful gardens with all sorts of hidden gems, a visit to Ballymaloe is an absolute must.
Ballymaloe house and gardens are nestled in a 400 acre estate that dates back to the early 1800’s in the rural setting of Shanagarry, East Cork. Alongside this renowned Irish country house hotel and restaurant owned and run by the Allen family for over 40 years is there famous cookery school and gardens. It is here in one of the many individual gardens of Ballymaloe that you will find the Shell House. 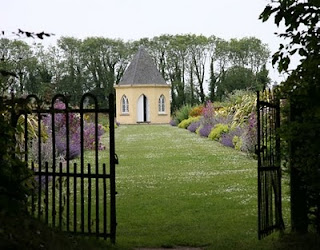 As you enter the Shell House garden through the gate, a straight grass path leads towards the Shell House. At the far end of the of the herbaceous border is a deceptively simple little building with a slate roof and gothic windows. When you enter it will take a moment for your eyes to adjust to the light, you then begin to realise that the exterior was indeed a deceptive, careful ploy. The walls, window sills and ceiling are encrusted with a myriad of shells. In the centre of the pebble studded floor is a circular pool of shallow clear water. This extraordinarily beautiful Shell house was Darina Allen’s idea, a surprise present for her husband Tim. 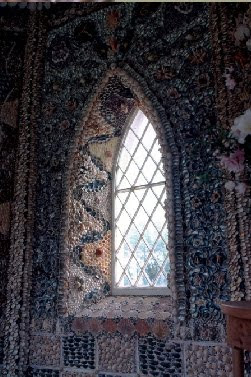 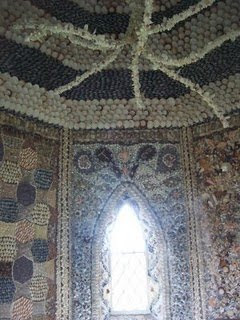 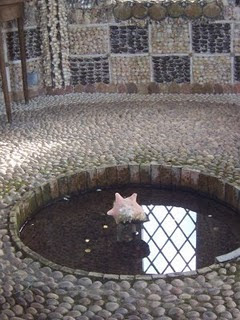 Inside the shell house
The interior of the shell house was created by the fantastic award winning shell artist Blott Kerr-Wilson in July 1995 and was completed on the 26th of October. The day before Darina and Tim celebrated their silver wedding anniversary. 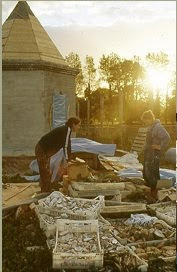 During the construction
The shells that were used in the creation of this house came from many different sources. Darina had been collecting shells for many years with a vague idea of building a folly. Blott brought some shells with her and more were given as gifts when people heard about the project. Gazing upwards to the ceiling, you will notice how scallops and mussels, laid rank upon rank, increasing in size give the illusion of more light. Every shell used in the roof once encased a mussel or scallop that was consumed at Ballymaloe House or at the Ballymaloe Cookery School. 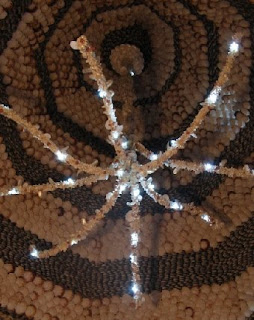 Ceiling of the shell house, complete with shell chandelier
Tim and Darina designed the building themselves. Tim wanted a very classical building with something completely different hidden inside to amaze and delight when you step across the threshold. Blotts own inspiration for her design came from the time she spent at the Alhambra palace in Granada.

Closeups of various details on the walls
When creating her designs, she would work out the patterns in her head and then sketch the ideas onto the wall with chalk, and she would then cement the shells on. Although Blott like to work at night, she was rarely alone. There was always someone around to watch in wonderment at the work that was progressing. An article from Gardens illustrated, wrights that, soon after Blott began work on the shell house, the school holidays began, and hordes of children descended on Ballymaloe, as her work never ceased to interest and amuse them. In the article, Blott tells “I love to work at night and they would sneak out in their pyjamas, and cycle to the field where I was working. It was just like E.T. I would see the lights of their bicycles lined up outside the shell house and hear them whispering “Shh, Shh” very loudly”

Closeup of shell chandelier
Another visitor who came often to review the progress was Tim's father the late Ivan Allen. He gave Blott the inspiration to turn the window sills into seat because when he would come he would sit on the sills and from there he was able to admire the emerging patterns as they were created whilst he was seated.

Sill seat for Ivan. It’s design partly accredited by the shells eaten the day before.
Ballymaloe house and gardens are a magical place, the shell house being no exception. The gardens are open to the public all year round, so do go and see it for yourself, as the memory will stay with you for years to come. Check out their website for more information http://cookingisfun.ie/
For all of those who admire Blotts amazing shell art, you can find more examples of her works on her website
http://www.blottshellhouses.com/index.html

Thanks to Blott and the Allen family for their kind permission for the use of Photographs and information from there lovely websites.
Posted by Stone Art's Blog at 1:32 PM