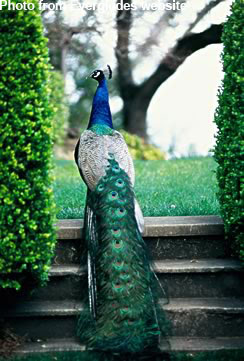 A few months ago, I was asked fellow garden blogger Britt Conley from the Photo Garden Bee to partake in a photo meme. For the post I chose a photo I took at the Everglades Gardens set in the Blue Mountains at Leura, Australia. Picking this photo (below) made me want to write a post about the gardens themselves, so that is what I am going to do now. 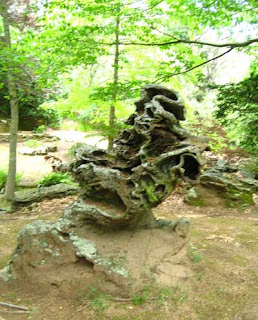 Everglades is one of Australia’s foremost heritage gardens. This treasure from the 1930s sits in twelve and a half acres of European-style gardens and native Australian bush with breathtaking views over the Jamison Valley in the World Heritage listed Blue Mountains in New South Wales, Australia. 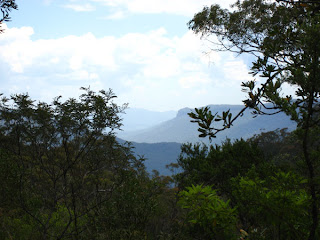 View from lookout
The site purchased by Henri Van de Velde in 1932 had been left to run wild since 1910, when Mrs Stonier’s eight acres of orchard were ravaged by bushfire. The site sloped steeply, with a one in two gradient in places. Beyond the orchard, a further five acres of natural bushland fell away with precipitous drops to the Jamison Valley and Gordon Falls far below.

The site was rocky, formed from Triassic sandstone rich in the iron oxide which coloured it with dark red and purple bands. Sandwiched between the ironstone, much softer layers of sandstone eroded at a faster rate over the millennia, leaving a rock face deeply etched with curving hollows and stripes. The earth was thin and sandy, poor in nutrients and full of ironstone fragments (resulting in fantastic rock formations like the photo from my photo meme and the one below). 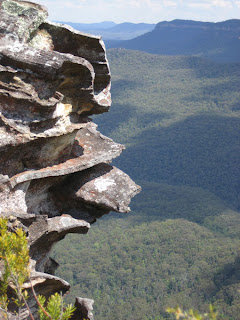 Architect Paul Sorensen overcame the lack of fertile soil by hand digging areas for planting to a depth of 600-900mm. Soil excavated from what was to become the Grotto Pool was distributed to garden beds and enriched with humus. Ironstone was removed and graded according to quality and colour. The best pieces were used to create the massive, drystone walls which are a main feature of the garden, while those of a lesser quality were used for packing and filling. 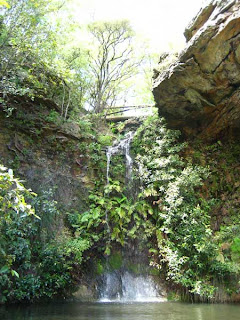 To make the site accessible and suitable for planting, Sorensen followed the European tradition of forming massive ‘platforms’ to civilise the landscape with a series of terraces formed and kept in place by the ironstone walls. The physical labour required to create the walls and planting areas was daunting. There was no heavy machinery available in those days, and few skilled tradesmen. Australia was, however, still in the grip of the Great Depression. There were plenty of able-bodied men who were glad of the opportunity for work 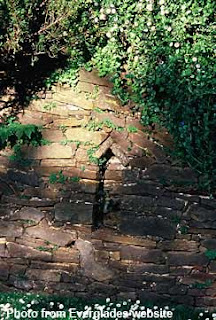 Fourteen stonemasons at a time were employed to construct the walls which snake along the lookout above the Gordon Falls and delineate the terraces. While stretches of wall may have been built using relatively unskilled labour, the hand of highly skilled stonemasons is evident in features such as the perfectly rounded, barrel-ended walls leading up from the Studio Terrace, and the neatly made weep-holes and apertures for taps seen on the Cherry Terrace. 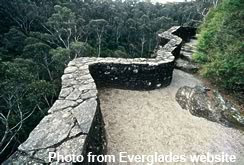 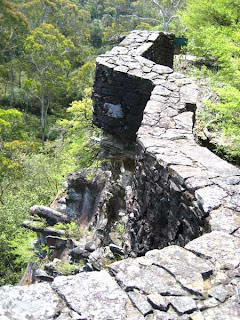 Walls of the lookout
Besides all the wonderful stonework two other features that stand out in my mind, are the Garden Theatre and the many wood carvings around the gardens. 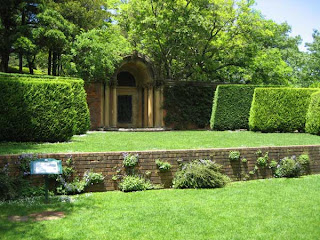 The Garden Theatre
The Garden Theatre at Everglades is recessed off the left side of the Studio Terrace looking towards the view. The golden pyrmont sandstone arch which forms the dramatic backdrop to the stage was originally the recessed entrance to the London Chartered Bank of Australia on Sydney’s George Street. The arch is flanked by tall hedges clipped formally to form the wings of the stage. The stage is a major focus for the cultural and community entertainments -including weddings -which bring many thousands of visitors to Everglades each year.

Syrian born landscape architect, Fred Alwahan, created many sculptures for Everglades and a new life for the limbs of many dead trees.

Information and a few photos from the Everglades Gardens Website http://www.everglades.org.au/
Posted by Stone Art's Blog at 11:49 AM