The ancient salt mines of Wieliczka, a blog post from Poland 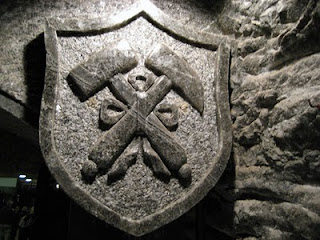 A few weeks ago, my wife had to go to Krakow for a conference, so we decided to make a city break out of it as neither of us had been to Poland before. Krakow is a fantastic city, which I would highly recommend a visit to, and which I have added to my list of best city breaks ever. One of the highlights of the trip was a visit to the salt mines at Wieliczka just outside of Krakow. This is probably the most fascinating place I have ever visited, and is about as close as you can get to being in the mines of Moria from the Lord of the Rings. So it comes as no surprise that 1.2 million people visit the Wieliczka Salt Mine annually.
The salt mine in Wieliczka is a unique development in the history of mining, because the rock salt deposits were mined here without interruption from the early 13th century to the end of the 20th century. The scale of excavation in this mine is very large, with corridors, galleries, chambers, underground lakes, as well as minor and major shafts, which are located over nine levels and extend for the total of about 300 kilometres, reaching a depth of 327 metres
The largest collection of original tools and mining equipment illustrating the development of mining technology from the Middle Ages to modern times have also been preserved here. 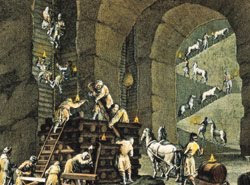 The mine also features a 3.5-km touring route for visitors (less than 1% of the length of the mine's passages) that includes historic statues and mythical figures. The oldest sculptures were carved out of rock salt by miners, and more recent figures have been fashioned by contemporary artists.
Our tour began by descending 378 steps down the wooden staircase in the Daniłowicz Shaft into the mine on Level I at 64 meters below. 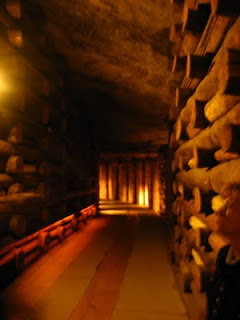 As you enter the chambers, timber beams prop-up parts of the chambers, over time these timber beams have soaked up so much salt that they have become rock solid themselves. The salty air that preserves the wood down in the mines is free of bacteria and allergens, which is also beneficial to asthma sufferers, and for this reason the mines also include an Underground Rehabilitation and Treatment Centre, that operates as a non-public healthcare centre. The Centre is the world leader in providing innovative rehabilitation and treatment of respiratory system diseases basing on the best practices of contemporary medicine, while profiting from the natural micro-climate of underground salt excavations which cannot be recreated on the surface of the earth.
We then ventured on to the next chamber, which was named after Nicolaus Copernicus, who was one of the first tourists to visit Wieliczka Mine. On the 500th anniversary of the famous astronomer’s birth, this salt rock carving ‘Copernicus’ by sculptor Władysław Hapek was added to the chamber. This was the second time that day I discovered a famous historical person to be polish (the other being the great Chopin)
From here we went on to the first of many chapels carved out by the miners. This one being oldest fully preserved chapel in the mine, is the 17th century Baroque Saint Anthony’s Chapel. Most of the photos here were taken be me, but unfortunately as it is a mine, it is dark and cramped, my amateur photography skills along with my holiday snap digital camera meant I was unable to properly capture parts of the mines, so I have added a few pictures from the mines website.
The life-sized salt statues by the sculptor Mieczysław Kluzek illustrate one of the oldest and the most beautiful legends of the Wieliczka Mine. When the Hungarian Princess Kinga married the Polish Prince Boleslaus the Chaste, she received as dowry one of the salt mines in the Marmaros region, she cast her engagement ring into the mine. The ring miraculously travelled to Wieliczka together with the salt deposits, and was found in the first block of white gold dug in Wieliczka.
The rock salt is naturally grey in various shades, so the carvings resemble unpolished granite rather than the white or crystalline look that many visitors expect.


In the Casimir the Great Chamber is a carving of King Casimir the Great, who organised and set in the form of a statute the law regulating the management of the salt mines. Back in medieval times salt used to be one of the world's biggest and most profitable industrial establishments, commercially a medieval equivalent of today's oil.
As we travel through one fantastic chamber after another passing many rock carvings and cordoned off corridors that make up part of the 300 kilometres of tunnels and climbing deeper and deeper into the ground, at 101 meters down, we arrive the most spectacular chambers of the entire mines, the Saint Kinga’s Chapel.
The Saint Kinga’s Chapel is the most impressive and opulent of underground temples. The chamber, carved in a block of salt, has been a place of worship since 1896. The chapel ornamentation has been created over a period of more than a hundred years. From late 19th century until 1963, the sculpting was conducted by self-taught miners-sculptors, Józef and Tomasz Markowski and Antoni Wyrodek. Their work is continued by the new generation of miners, who create new sculpting projects.
The bas-reliefs and sculptures which decorate the chapel walls are scenes from the New Testament 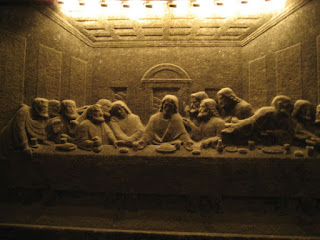 If you fancy getting married here, they do occasionally have weddings and church services down here.
The floors of the chapel are craved to look like tiles. 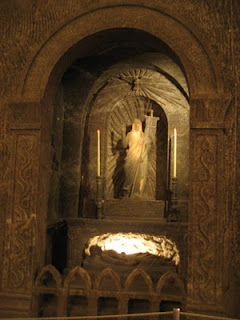 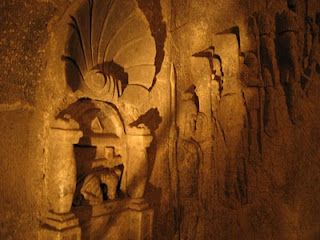 Even the crystals of the chandeliers are made from rock salt that has been dissolved and reconstituted to achieve a clear, glass-like appearance.
From here we pass one of the underground lakes in the The Erazm Barącz Chamber. This chamber owes it allure to a small salt lake, 9 m in depth, filled with brine, a saturated solution of salt. The wooden gallery around the highest part of the chamber gallery is used to monitor the condition of the salt walls. Of particular interest is also the salt pillar, which is a natural way of securing the excavated chambers.
Farther along at a depth of 110.6 m, we come to the Drozdowice Chamber, where a salt rock carving depicts two carpenters, a testament to all the skilled carpenters which constructed all the amazing timber structures that hold up large portions in the mines. The chamber itself was created as a result of excavating a vertical block of green salt in the early 20th century, the chamber was protected by constructing a casing as and a two-level wooden construction connected by platforms and galleries. In 2000, after renovation works which lasted for ten years, the chamber was reincorporated as part of the Tourist Route. At present, the chamber is a venue where exhibitions, concerts and banquets are held.
Another fascinating chamber was the Weimar Chamber. It was created in the early 20th century, after a block of green salt was excavated by machines. In the 1960s the bottom of the chamber was flooded with brine, and a lake was created.
After descending down more timber staircases to 130.9 m underground, we came to another one of the underground lakes, in the Józef Piłsudski Chamber.

The chamber was created by combining the excavations of two adjacent blocks of green salt. In the 1830s, the Austrians linked the twin chambers with a 10-m tunnel when setting up the first tourist route. They also built wooden stairs and a platform, and filled the bottom of the chamber with brine. A special tourist attraction was provided by raft crossing through the tunnel to the accompaniment of fireworks and music played by the mine orchestra. Of particular interest is also the 19th-century figure of Saint John Nepomucene, the patron saint of the drowning. Despite the saint’s presence in the chamber, there was a  case of mutable drownings here. Apparently back during the Nazi occupation of Poland, the Germans used the salt mines as a base, one evening a group of intoxicated German solders decided to go out for a boat ride, which resulted in the raft capsizing, and in all onboard drowning
After passing through many more fascinating chambers, and even a stop for a nice cold polish beer, in the bar and restaurant at 132m down, we passed another large more modern chamber, named the Warszawa Chamber. The chamber was excavated in the 19th century by digging a total of 20,000 tons of salt. Due to its impressive size and the décor, the chamber is used for various events, such as conferences, training sessions and banquets.

There are many fantastic chambers to see (20 in total) over the 3 hour tour of the Wieliczka salt mines, too many in fact to talk about as this blog post is already becoming epic. The last chamber I will mention is the last chapel you pass before being transported back to the surface by a four-level dark old mining lift from a depth of 135.6 m.

The Saint John Chapel (also known as the Holy Cross Chapel) is considered to be the mine’s most beautiful wooden chapel. The polychrome barrel-vault ceiling of the chapel holds an altar with crucifix set against a multi-coloured panorama of Jerusalem. On the ceiling, a painting of the Holy Trinity against a setting of a blue sky is placed. The most precious object in the chapel is an 18th-century figure of Christ Crucified.
Well I could continue to waffle on about this fantastic place, just as I could continue to wander around it, but as I am righting a blog post and not a book I will leave it at that. I would only recommend to you that you visit Krackow and the salt mines at Wieliczka, as it is one of the most amazing places you are likely to see. As one travelled Frenchman observed in the 18th century, Krakow's Wieliczka salt mine is no less magnificent than the Egyptian pyramids.
For more great information on this place check out there website http://www.kopalnia.pl/
Posted by Stone Art's Blog at 6:32 PM