A trip to Co. Clare for some dry stone walling with the DSWAI

Last weekend the DSWAI had a meet up in County Clare as we were invited by quarry owner David O' Connor of Liscannor Flagstones Quarries to come build some stone features at his quarry in Miltown Malbay.
Despite the long drive, I was looking forward to the trip, as it would give me the chance to take the scenic route through The Burren landscape, a stunning part of the country I have not been to in many years.

The Burren is a karst-landscape region or alvar, measuring approximately 250 square kilometres. It is one of the largest karst landscapes in Europe.
The word "Burren" comes from an Irish word "Boíreann" meaning a rocky place. This is an extremely appropriate name when you consider the lack of soil cover and the extent of exposed limestone pavement also known as a karst-landscape. However it has also been referred to in the past as "Fertile rock" due to the mixture of nutrient rich herb and floral species that flourish in the limestones cracks known as 'grikes'. There are in fact there are more than 650 different flowers, plants, and ferns to be found in this unique area of karst limestone, from Spotted Orchids to Spring Gentians, from Mountain Avens to Purple Orchids. 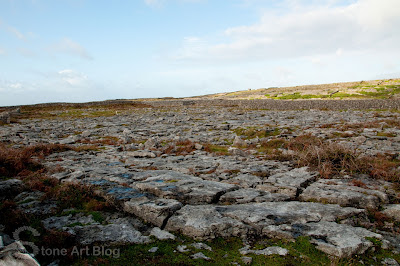 There is an annual festival called 'The Burren in Bloom' which takes place from the 4th of May till the 1st of June. Check out www.burreninbloom.com for more information about this wonderfully unique festival.

One of my first stops in the Burren was to visit Ireland's most famous and most photographed Dolmens, Poulnabrone Dolmen
Although much of the Burren landscape may look bare and desolate, there are many amazing stone structures and awe inspiring landscapes hidden away here waiting to be discovered, from stone forts and massive caves to the world famous Cliffs of Moher. 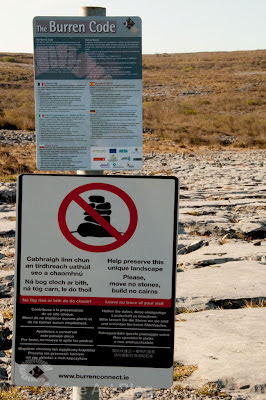 The Burren is a great place to go to see vast stretches of beautiful old stone walls and structures, and the Burren stone itself is one of the most beautiful and lively textured types of stone I know. You can see more examples of Burren stone walls in my blog post Drystone Walling on Inis Oírr Island. 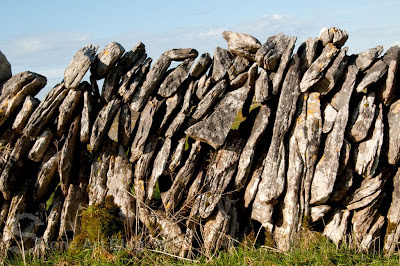 Arriving at my destination in Milltoen Malbay after my inspiring drive through the Burren I was well up for getting stuck into a bit of dry stone walling. For our little stone project we decided to build a section of drystone wall in the traditional style that is most common in this part of Co.Clare. It would be a double sided wall with a single stone cap that is laid diagonally. 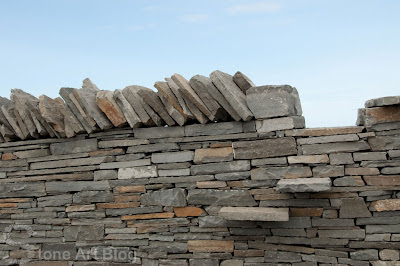 We also incorporated a traditional 'step stile' feature. For those of you who don't know what a step stile is, this is a feature that would allow farmers to cross boundary walls without the need for a gate. They are made by using long stone slabs that run through the width of the wall and protrude out either side creating a cantilevered step on ether side of the wall. This allows a person to step up on to the wall and back down the other side with ease. Another variation of this is what is known as a squeeze stile, where a long narrow gap is left in the wall just wide enough for a person to squeeze through, yet narrow enough to prevent the livestock getting through. 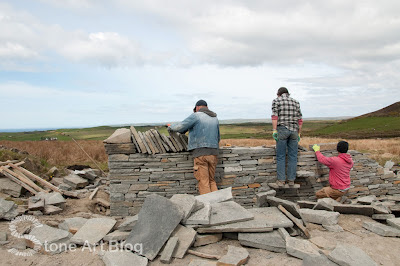 It was wonderful to to have the opportunity to work in such beautiful settings surrounded by an abundance of great building stone. As one of the lads said, it was like being in a sweetshop for stonemasons. 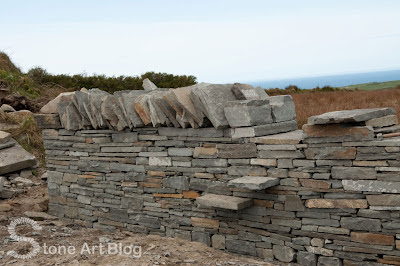 Working here also gave us a chance to see some of the amazing pieces of stone David is extracting from the quarry.
The Liscannor stone itself is one of the most distinctive types of stone in Ireland, and is instantly recognisable by the rich fossils which run throughout the stone that gives it its rich texture 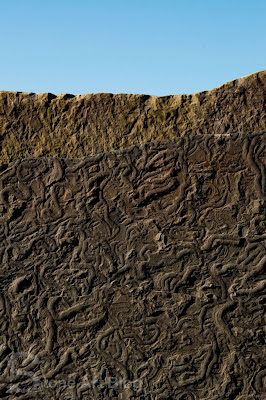 The Liscannor sandstone is completely unique to this part of the country and over time has found its way to all corners of the world. At its peak the area employed over 500 men in at least nine quarries.
The quarries were so prosperous in the early 1900's that a village was built around the famous Doonagore mines which put Liscannor port on the map. It was one of the busiest of the small ports along the west coast of Ireland with its shipments of stone to London and Liverpool. However, the advent of World War 1 put an end to all the prosperity, and when the boats were unable to travel the mines closed.
A number of mines reopened in the 1960's and are still producing this famous stone today, David's of course being one of them. 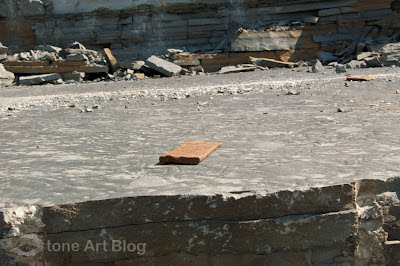 This quarry is apparently extracting the largest stone slabs in the country, a claim that is not hard to believe when you see the size of some of the enormous pieces laying around the quarry. 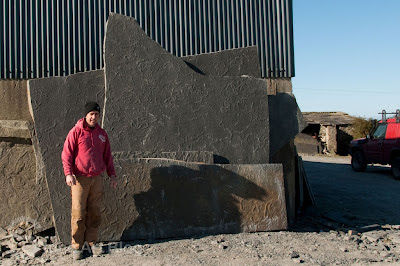 Another successful DSWAI event over. Thanks David O' Connor from Liscannor Flagstone Quarries, not only for use of his quarry and the mountains of stone he donated to the project, but also for the endless hours he put into helping us out.

More info and photos of this DSWAI event and on the Liscannor stone in my blog post on the DSWAI webpage here.